A heritage village is an outdoor museum recreating life in small town or in days past. In some places they are called open air museums. In Holland they are openluchtmuseum and Freilichtmuseum if you are in Germany. When I was in Ireland last summer they had some called cultural heritage centers. 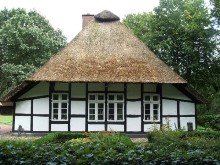 While there is a lot to see at a heritage village I'm going to focus on the houses. Depending upon the museum you might see houses from the stone age down to the modern era. The house shown to the right is at the Volkskundliches Freilichtmuseum in Bremerhaven, Germany.

My friend Joe Brown sent me some fine photos from this open air museum, and really spurred me on to create this page. I had been wanting to do this since I started this site, but discovered that I must have rarely kept a camera with me when I went to these places. Joe was obviously better prepared. Bremerhaven is his wife's hometown and you can find this park in the list of heritage villages below.

My favorite such park is Shikokumura, in Japan.  It is twenty-some buildings that they relocated from all over the island of Shikoku. It is well worth the visit, and close to the city of Takamatsu. I must not have had my camera that day because I can not find any pics from my visit.

Probably the most famous such museum is Williamsburg, Virginia. It was the capital of Virginia after Jamestown and served in that capacity up until the time of the Revolution. When the capital was moved to Richmond it fell into decay until resurrected by Rockefeller money. I spent a lovely Christmas there with my new wife, courtesy of my parents. No I haven't gotten a new wife, it is just that we were younger then.

Of course reconstructed castles are a form of heritage village, but I am just as interested in the homes of the humble. Grand palaces are great places to visit, but they are just glorified descendants of the mud hut.

More recently I visited Bunratty Castle in Ireland, which has a nice village attached to it. That gives you a taste of 15th century Ireland, but going back a little further is the cultural center at Craggaunowen, in County Clare. It has some iron age houses in it, including a crannog and a ring fort. The former is a walled village on a man-made island.

Most of the websites listed were pulled off of the internet with no personal knowledge of their facilities. A few I am familiar with. Some of their websites are outstanding. Some are pitiful.

I will be glad to add more, if people send me their information. Better yet, send me photos. Add as much detail as you can remember.

If you have better websites for some of the above parks, I will gladly link to them as well. 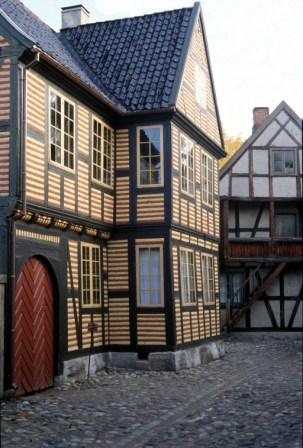 The bookbinder's house at the Norsk Folkemuseum. I love this house. What is going on with the alternating brown and yellow stripes between the timbers? Is that plaster that has been painted? 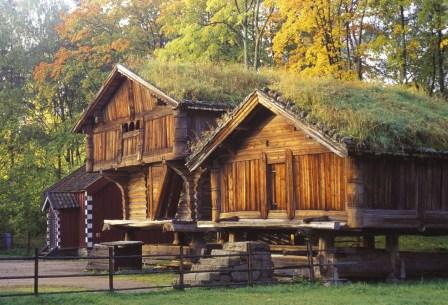 One of several farmhouses at the Norsk Folkemuseum. Note the living roof. Also the house is elevated. Is that to keep it above the snow?

To Top of Heritage Village