Brick veneer siding is a way to reduce costs while retaining many of the aesthetic advantages of a brick exterior. I’m going to give you a little background to brick veneer siding, and then we will take a look at costs, and at the bad things that can go wrong, and some of your options.

I’m a bit of a purist and I wish we could all use real bricks, but I’ve also spent most of my life half-broke, so I understand the need to save a few pennies, and veneer is definitely one way to save.

Brick veneer siding can mean several different things. This article deals with siding made from thin bricks adhered to a wall with a grout, much like tile is in a bathroom.

I also have an article on brick siding, both true structural walls, and cavity walls. The latter has an outer wall one brick wide anchored to an inner wall with ties. This is sometimes referred to as an anchor veneered, whereas the “tiled” brick that we are discussing is sometimes called an adhered veneer.

It can also refer to several panel products that are glued in place. I will discuss these in a later article.

If we are treating the exterior like a large tiling project why not just use tile? Why brick?

The primary reason is aesthetics and tradition. Houses are traditionally built out of bricks. A brick house is something we are used to. It blends into the neighborhood. It blends into hundreds of years of house history. But…if you want to tile the exterior of your house you can. The costs of the tile and the labor will probably be greater, but all the structural elements behind the tile will be the same as for brick veneer siding.

Let us take a look at those elements. Starting on the inside there is the wall, possibly a framed wall made with 2x4’s. To this there will be attached some kind of board siding, such as OSB. This is what you will be attaching the bricks to, indirectly. Next to the OSB there will be a moisture proof layer. These days that will usually be house wrap. On top of this there might be a layer of insulating foam. Next comes a drainage mat. This is a mesh product that creates a small air gap and provides a drainage channel for any moisture. On top of the drainage mat there will be galvanized expanded lath. This is what the mortar will adhere to. The lath is attached to the OSB, through the intervening layers, with nails or screws. A layer of mortar is applied to this lath. This is called the parge coat. When it is in place it will look like you have a concrete wall. After this a thinner layer of mortar is applied and it is to this layer that the thin bricks are set in place. 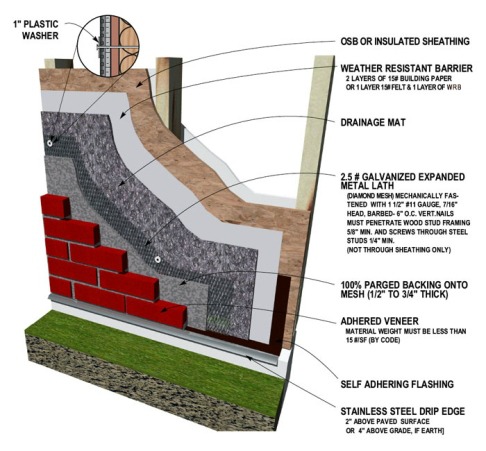 A view of the structure of a adhered exterior brick veneer siding courtesy of the Masonry Advisory Council. Click on the photo to go to their excellent series of articles on all things masonry.

Another way to look at this project is as a stuccoing of the house, but with the added step of sticking brick tiles into the wet stucco.

This is the system that you need to use if you are applying the bricks to an exterior. If this is an indoor project then you can save some cost. You can apply a much thinner layer of mortar directly to the wall, using the same techniques as if you were applying tile to a wall. This is known as a thinset mortar, and you are essentially gluing the brick tile to the wall. This has no way of allowing moisture to drain, so it is best not used for exterior, except in arid regions.

The brick is cut so at to leave a corner. This makes it look like you used real, full-sized bricks.
In most cases the thin bricks used are actually real brick that have been cut down into a 1/2 “ thickness. For corners they have bricks that have been cut to leave the end in place. These bricks are often reclaimed bricks from houses that have been torn down. In this case you can consider this to be a very green form of siding.

There are also bricks that have been molded to the correct size, or extruded and then cut to size before firing. Rather than starting out as bricks, they start out as brick tiles.

Another option is to buy brick tiles made from alternative materials. A common alternative is a brick tile made with vermiculite. Vermiculite is a natural material that is extremely light. The advantage here is that the lighter material is less likely to fall off from its own weight before it has cured, and it will be easier to handle on the job site, since there will be less weight to move around. It is also particularly effective in reducing the transmission of sound, so it might be a better choice than real brick if you are in a noisy area.

There are even artificial bricks where a natural material is bonded together with a synthetic, rubber like material. This makes for a flexible tile. I am not sure how often this is needed, but it would allow you to make curved walls. You can do this with regular brick tiles, but only with a fairly shallow curve. The problem I see is that the synthetic compound is probably not going to last as long as real brick. We know brick lasts for ages, but the synthetics have not yet stood the test of time.

Before I move on to what can go wrong with brick veneer siding, I want to take a look at an alternative way to apply the veneer. There are a couple of products on the market that use a metal grid to control the location of the brick. Less skill is required, so it is more appropriate to the do-it-yourselfer. It is also used by contractors who don’t want to incur the cost of a mason, or where such skills are hard to come by. So long as you securely attach the metal grid, and keep the grid square and level, all should be good. 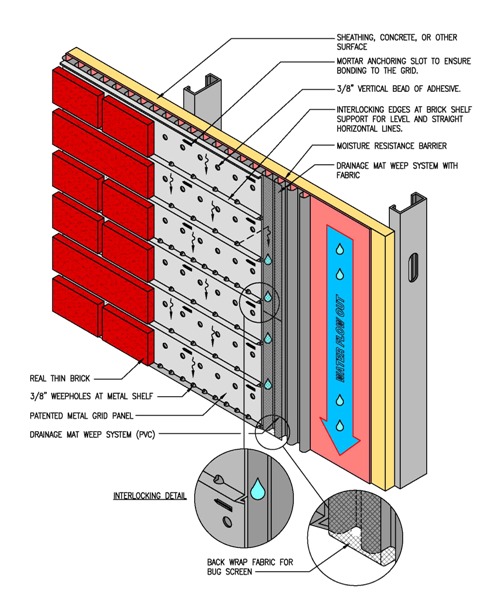 A cutaway view of a thickset, drained veneer system – courtesy of Brickit

Here is a picture of the system employed by Brick-It. This is their fancier system. Their simpler system lacks a means of draining the water, so I would not recommend it for an exterior in a wet area.

The bricks are essentially glued in place with a caulking gun. Then, after they bricks are set, you fill in the joints between the bricks with a special mortar mix,that also comes from a caulking gun, but one that is designed for mortar. 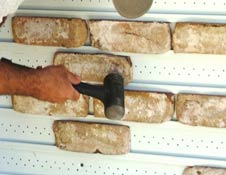 Tru-brix fit into slots that hold them in place.
Here is the system employed by Tru-Brix. This is a little different, in that the bricks have been grooved to snap into the metal grid. It is probably a better system, but you have to use their bricks. This shouldn’t be a problem, but it gives you a little less choice in color and may cost you more. There is no adhesive applied to the back. The bricks are held securely by the grid. Mortar is used between the bricks, and this holds them in place.

I don’t have an affiliation with either one. Clicking on the photos will take you to their respective sites.

One thing I have noticed as I move around to the see the various products, is that most of the brick veneer vendors are stuck in this stretcher bond (aka running bond) mindset. If you have seen my page on brick walls you’ll know that I can be rather passionate about this. Bricks don’t need to be boring, but you will have to be insistent about using an alternative bond. You will also either need to buy bricks cut so that their header ends show or make these cuts yourself. Most of the brick vendors charge way too much for their headers, so it might be cheaper to cut them yourself. A mason could do this or the equipment can be rented.

What you will get for your efforts is a brick wall that truly distinguishes itself from its peers. The advantage of living in an era of boring masonry is that it takes very little effort to stand out.

Here is your ordinary stretcher or running bond. Each brick faces the same way with each coarse being slightly offset from the one below it.

Flemish bond. Every other brick shows an end view.

I mention this because I have thought a lot about it. I am considering re-siding my house and one option is a brick veneer, but I see no point in going to this extra cost unless I can make it look really nice, and a special bond will do just that.

This concludes this page but not this article. On Page 2 I cover the costs of Brick Veneer and look at the problems that people sometimes encounter.

To Page 2 of this article - Brick Veneer Siding Costs