Gestalt laws are those basic concepts that designers use to understand how design elements will be perceived. Gestalt is a German word that means shape, but in the field of psychology it has the meaning that we can perceive objects that are only implied by its constituent elements. Certain Gestalt principle laws have been identified that help psychologists understand how we process what we see and how we translate it into mental images and these same principles can be used by the design community.

From an early age we organize our world by finding similarities and differences in things and grouping those things in our mind.

Think of people.  They can be boy or girl, young or old, friend or enemy, white or black, fat or thin. We do this with all types of things and its part of how we make sense of our world.  As children it is how we learn. As adults it is just part of the background processing that we do without even thinking of it.

It is important in design, because we do this naturally with anything we are looking at. If it is something complex we start to break that down into simpler elements. We will then group and categorize those simpler elements. It helps us make sense of the design, and an understanding of this principle can help the designer create something pleasing.

Now let us deal with the overall concept of what we see. The four concepts are: emergence, reification, multistability,  and invariance. 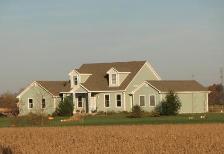 When we look at a house what we perceive first is the house, the whole. Then we can start observing its parts. We perceive the house before we perceive the window and the door even though we see them all at the same time.

This is our mind's natural workings to make sense of the world. Whole objects are processed first then we go into detail.

Consider this case: That object that is approaching, what is it? We can immediately identify that it is a man, not a car or a dog. Almost as quickly we start to pick out the important clues. He is male, he is smiling, he is walking quickly. Then a little while later we classify him as being a stranger, not a friend.

What we didn't do was see a nose, a hat, two arms and a trunk, and piece those together to decide he was a man. 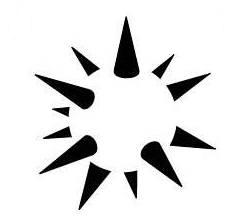 We often see more than what is specifically stated by its individual parts. Our mind fills in the gaps and assembles the parts into a whole. This process is so basic that we perceive the whole first (as in the concept of emergence).

Consider the picture to the left. The cones are shown, but the ball is implied, and our mind fills in the idea of the ball. We perceive what is not there.

Most objects we look at are stable. There is one thing we will see. We will clearly distinguish the figure from the background. There are some things that we look at which are not stable, or rather there is more than one point of stability forming alternative interpretations of the parts.

Often this is a matter of the figure and the background switching roles. What we perceive as the background can also be perceived as the foreground. Rubin’s vase is the classic illustration of this concept. However, the mind prefers stability, so it will tend to settle on one point of stability.

We can recognize objects no matter their basic orientation or size.  Even changes in lighting, or minor deformations of the parts will not prevent us from identifying the object. 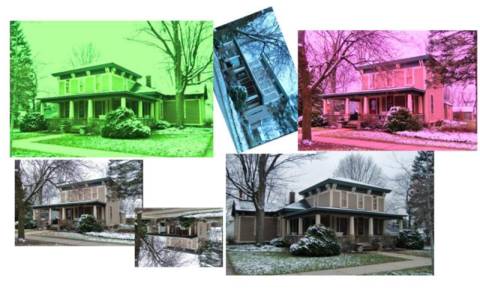 These Gestalt laws give us some idea of what we will perceive. There are somewhat different Gestalt principles that explain how we get there.  These are:  simplicity or (pragnänz), similarity, proximity, symmetry, closure, continuity, smallness, surroundedness and common fate.  We will deal with them in the next section, Gestalt Principles.