In Pattern 37 - A House Cluster, Christopher Alexander discusses how houses can be grouped to create a community.

In towns and cities houses do not stand alone.  They exist alongside other houses, alongside roads and walkways and often alongside shops and offices.

How they relate to those things around them will affect how comfortable they are to live in and whether they enhance or diminish the community around them.  Therefore the relationship of the house to the community is part of the architect’s field of interest.

I thought of Christopher Alexander and his ideas on urban planning when I discovered Braun Court last summer.  It is not a residential community but a community of shops, but where there are now businesses there were once families.

I was in Ann Arbor, Michigan for business and a restaurant in Braun Court came highly recommended.  Since it was a fine summer evening the best dining was outside.  In this case that put me right in the middle of the courtyard.

Had I the foresight to carry my camera with me, and had I sought out dinner while the sun was still high I might have had some pictures of Braun Court in its summer glory.  Instead all I have is photos taken on a cold winter’s day when the court was deserted and bare.

It is a shame because a House Cluster is about people, and how they relate and how the arrangement of houses help them to relate.

Before I go on let me throw a few other patterns in the mix.  While Braun Court represents pattern 37, it also demonstrates pattern 61, A Small Public Square, and pattern 38, Row Houses.

Take a look at the photograph below.

Braun Court is simply a small residential block where the street has been blocked off to become a pedestrian way.  That means it is not a court in the sense that the word is used in modern suburbs. There it means a dead end street.  Here it is a courtyard, and since the houses have all been converted to businesses it has become a small public square.

I do not know if the street became a court after the businesses moved in, or even if it has always been blocked off from automotive traffic. It does have some very tall trees right in the middle of what would be the street, so it has been in this current condition for several decades.

In the aerial photo Braun Court is revealed as an island of houses.  Parking lots now surround it and there are commercial buildings as neighbors and across the street a pleasant farmer’s market.  The latter is a good example of Pattern 30, Activity Nodes, and Pattern 46, A Market of Many Shops.  All of those are worth investigating.  What you can’t find on my site can be found at http://www.patternlanguage.com, but the detailed information on that site requires payment, or you can get the same information by buying the book A Pattern Language: Towns, Building, Construction. 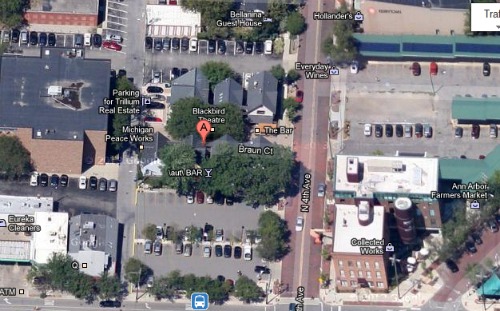 According to Christopher Alexander, houses should be built around a common open space.  Today houses front roads and the roads divide and the traffic keeps children from playing as a group and adults from mingling.  He recommends that cars and roads be kept out of the space between the houses and that public land allow for a space where residents can come together.

Placed in a community people do most of their visiting with the houses that immediately surround them.  It is a natural inclination that social science research has confirmed.  Based on this natural inclination Alexander recommends that a House Cluster be kept small.  Eight to twelve houses is ideal.  Braun Court stands at seven houses, so it falls a little short.

As sketched by Alexander a House Cluster is not linear.  The open area is more of a field than a line, but Braun Court does match the drawings for Pattern 38, Row Houses.  Here he envisions two lines of row houses, much as we often have on city streets, but instead of a street in the middle there is a pedestrian path.  This doesn’t have to be quite as wide as a street, so the houses are closer together, but the protection from traffic makes the pedestrian lane an ideal place for families.  Without the danger more time is spent outside, and more interactions with the neighbors are likely.

In a sense his Row Houses concept is the urban equivalent of a suburban House Cluster.  Braun Court has the houses typical of a House Cluster with the layout appropriate to Row Houses. Yet it is neither, since the families have been replaced with retail shops.

As it stands today Braun Court is instead A Small Public Square.  I don’t know the actual ownership of the common area in Braun Court.  It may be private land, but it is a commercial shopping area and so has a public character.  Christopher Alexander prefers small to large when it comes to public squares because there needs to be a critical density of people within the square to make it a place of communication and commerce. 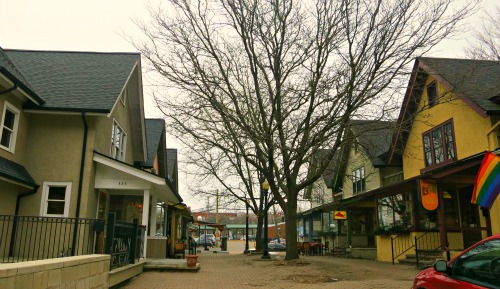 We have all seen large public spaces that are destitute of people.  There size seems to enforce that condition.  There is something uncomfortable about crossing a wide-open space by yourself when everyone else is huddled along the edge.  Yet cross that same space when there are crowds milling around and the act seems quite natural.

Alexander gets quite specific.  He recommends that the court be 45 to 60 feet across in its narrow dimension.  I did not measure Braun Court, but it is close to those dimensions.  Standing in the court you are never far from a building yet clearly in the open.  It is that proximity to structures that makes a small square successful.

In a city following Christopher Alexander’s advice there would be many Small Public Squares and only a few large squares.  There would be many pedestrian-only roads creating Row House communities and many House Clusters.

The problem with getting to this ideal is that our world now revolves around the automobile.  The problem of parking is real one that urban planners and city residents have to deal with.  Christopher Alexander also has a solution for that problem as well.

He sees two problems with parking. One is you need it near you.  Two is large parking areas created neglected areas.  His solution is to have lots of small lots, no more than 10 acres in size, and occupying no more than nine percent of the city area.  While some lots would be several acres, most would be small lots holding only seven to nine cars.  This latter pattern is Pattern 107, Small Parking Lots.  The limit is discussed in Pattern 22, Nine Percent Parking.

He theorizes that people in an area of high car density feel that the land is not theirs.  They become intruders in a world of cars.  Nine percent is not a random number.  His group did research on what people considered right, but he admits that there is not much science to back it up.  Maybe eleven percent is a better number.  Or eight.  Whatever the best limit there is a limit and when a city approaches that limit allowances need to be made for multi-level parking or underground parking, to keep the parking areas below the limit.

I don’t know how Ann Arbor rates for parking density.  Braun Court has unfortunately become surrounded by parking lot.  It makes it easy to find a spot nearby, but it does limit some of the pedestrian traffic that would otherwise flow through Braun Court.  But in a sense the parking island phenomenonn proves the point of this article.

On that fine summer evening when I was first introduced to the House Cluster called Braun Court all the activity was in the court.  People weren’t socializing and having conversations in the parking lots, but they were in Braun Court.  At least for the time that I was there it had become an ideal Small Public Square.

To Top of Page - House Clusters