Neoclassical Design - A Guide to the Confusion

A Palladian house is one that closely follows the style of the sixteenth century Italian architect Andrea Palladio. You might object to my including this as a separate style since it so heavily influenced the Georgian style. However most Georgian houses do not look much like what Palladio designed, while there are a class of houses, especially in the South, that have a distinctly Palladian look to them.

I have a special section on Palladian design, but let me summarize here. Palladio designed country Villas for his Venetian clients. These were for large estates, so he designed a house connected to dependencies, or outbuilding as we call them here in Ohio. This formed a 5-part design. You had a main house in the center. At a distance from the main house, on either side, were two smaller building, which might be farm building, or could be guest houses. Attaching these outbuildings to the main house were two structures with a slightly lower roof line. These could be colonnades, or an enclosed wing. It was symmetrical about the center-line formed by the entryway.

His early houses had a loggia leading into an entry hall. This was basically an indented porch. His later houses attached porches imitating Roman temples onto the front of the houses. This latter touch was his and where it appears on Georgian, or Federal or Greek Revival homes, it is simply a Palladian innovation applied to a later style.

Georgian home design gets its names from the three Kings named George who ruled over the colonies in the 1700’s. As manifested in England these were often houses built in stone, but in the colonies wood and brick were the materials of choice.

Typically these houses were rectangular, or had simple T or cross-shaped layouts. The interior layout involved rectangular rooms emanating from a central Hall.

The inspiration was from Palladio or other Renaissance designers, usually as interpreted by architects based in Great Britain. Georgian architecture typically had quoin at the corners. On the inside the décor tended torward the ornate, although this was probably more subdued in the colonies than in Britain.

What we call the Federal Style is also known as the Adams style. It originated with Robert and James Adam, brother architects. Robert developed his theory on architecture during his grand tour of Europe. His direct examination of Roman, Greek and Byzantine buildings led him to reevaluate the Renaissance interpretation of classical architecture. He developed his own Neoclassical design theory apart from any interpretation by Renaissance architects like Palladio. Adam’s houses eventually inspired the Regency style in Britain, and the Federal design in America.

Federal house plans look very similar to Georgian house plans. It is an evolutionary change. Compared to Georgian, Federal houses have a lighter feel, the décor is simplified, and more truly classical. Federal design houses often have round or oval rooms. Sidelights and fanlights were common around and above doors. Doorway detailing tended to be Greek rather than Roman.

I have create a special section dealing with the Federal style.

With all the Greek elements in earlier classical styles it can sometimes be difficult for the layman to separate Greek Revival Architecture from other Neoclassical design styles. They all tended to have columns, and often columned porticos. Supporting the roof there was often a distinct entablature, with an undecorated frieze and a heavy cornice.

One clue would be the absences of Roman design elements, especially arches. The other would be the tendency for Greek Revival gables to look like the pediment of a Greek temple. Sometimes this was projected forward and supported on Greek columns so that the porch formed was the same width as the house, and fronted the street.

Most houses were not so fancy, and without a lot of classical decoration it can be difficult to decide if it’s a Greek Revival house or a Federal house with gables. If it is in the Midwest and it is of the right age it was probably intended to be a Greek Revival as that style's popularity coincided with the population expansion beyond the coastal states.

More information can be found here.

While Colonial Revival can cover Cape Cod and other early Colonial styles the term is often applied to a resurgence in Neoclassical design that started at the tail end of the Victorian era and continued, off and on, through to the present day. It tends to be a mix of the styles, and is inevitably altered by adapting it to modern life. Construction techniques changed. Houses now have to be plumbed and wired. People are no longer satisfied with 18th century amenities.

Often it’s a Colonial look, at least on the front, but the insides are current, with open floor plans and other modern innovations. It can also be more of a marketing term, in which a couple of columns bracketing the door are its basis for a claim to a Neoclassical design pedigree.

At its best, however, a modern adaptation of the earlier styles can be a delightful application of all that was right with Neoclassical design 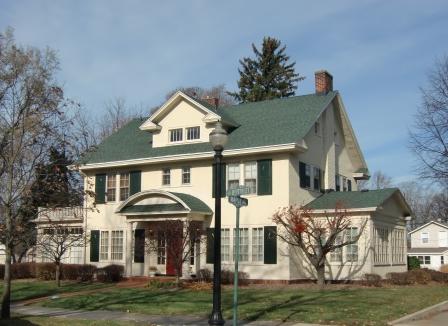 A Colonial Revival style house in Holland, MI
To Top of this Page - Neoclassical Design

Back to House Styles