In the Southern colonies of what would become the United States, summers are sultry.  The temperatures stay much hotter than was common to England.  The typical English homes were not well suited to this environment. 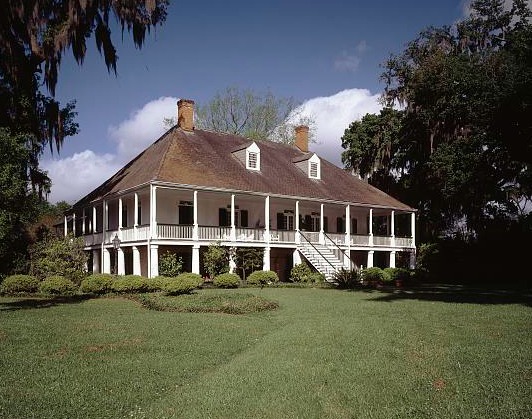 Whereas in the North the focus was in keeping families warm and snug in the South a premium was placed on keeping the air moving.  The Tidewater home was created in an effort to reach this ideal.

To achieve this end they created something new and unique to the new world.  The genius of the Tidewater home was not in the main structure, but in the porch that surrounded it.

With the large porch area the Tidewater had a much larger footprint than was actually enclosed by its walls.  The porch was both an expansion of the living area and a shield for the house against the sun.  It kept direct sunlight from flooding in through the windows and kept the exterior walls cool.

To achieve a porch on all sides the Tidewater Plantation house had a hipped roof.  Then the porch roof could simply be a continuation of the roof over the main part of the house.  Often the porch roof had a shallow pitch.  This often meant that there was a change in pitch, with the roof getting steeper over the central house.  The shallower pitch of the roof allowed for a wide porch, suitable for all kinds of activities.

In many flood-prone places the house was elevated, with a crawl space underneath, and where necessary, elevated several feet, usually on stilts or pilings.  Sometimes a ground floor was finished but reserved for utility functions, while the living area was on the raised floor. 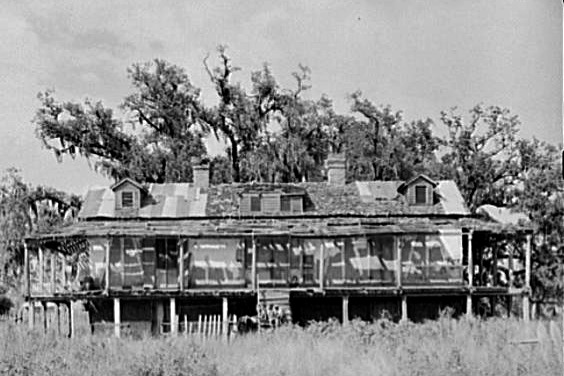 This is Trepagnier Plantation, abandoned when this photo was taken in the 1930's.  A good example of a Tidewater house on stilts.  The roof is not hipped, but it still has a wrap around porch.

While the wrap-around porch was the culminating point, a lot of early houses merely had a front porch, or a front and back porch.  These were often either gabled or gambrel roofs.  It wasn’t until people began experimenting with taking the porch around the sides that hipped roofs became important.  Houses patterned after these simpler, early Tidewater homes are sometimes called Tidewater Cottages, although the name Tidewater is broad enough to take in many house with extensive porches designed into the home. 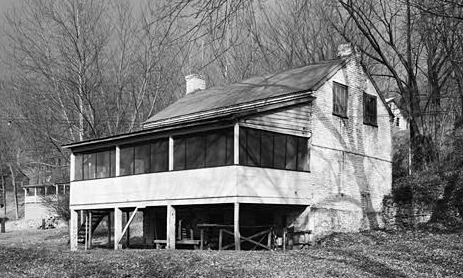 This lock house on the C&O canal is typical of an early Tidewater cottage.  It is really just one-and-a-half-story home with a porch tacked on, but this would evolve into homes that were more intentional in their incorporation of the porch into the overall structure.

Since the Tidewater homes were evolving when Georgian, Federal and Greek Revival styles were popular many homes have classical design elements.  Its also true that the house evolved from simple, vernacular homes with little or no decorative additions, so you can find both simple and classical Tidewater houses.

When air conditioning and insulation came along the porch lost its place in the American home.  With it went a tradition of outdoor relaxing and socializing.

Its not correct to say that the differences between Southern houses and Northern houses disappeared, but it is fair to say that a lot of homes that looked at home in New England started showing up in the subdivisions of Southern cities.

But the Tidewater home did not go extinct.  There was a certain style to the Tidewater home and people longed to return to a look that was native to the area.  It even spread North in some cases, as transient Southerners brought a piece of Southern style with them.

From a practical standpoint the porch offers fewer benefits than it used to.  People rarely spend hours of the day on their porch and there is less foot traffic to chat with if you do.  It has become more of an expensive fashion accessory than an integral part of the house, but for those of us who like the Tidewater it is a good thing that people are willing to pay extra for this fancy bit of wrapping. 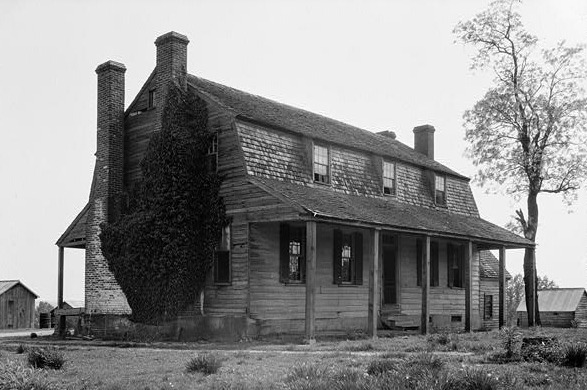 To Top of Page - The Tidewater Cottage and Tidewater Houses