and Its Effect on the Craftsman House

What is the Arts and Crafts Movement and what does it have to do with designing houses?

I wrote a little article on the Gothic Revival that ties into this, but here is a quick background summary. The Gothic Revival reintroduced Gothic design into architecture, but also introduced all the decorative elements that went with it. A new generation of craftsmen were trained in what had been dying arts. Gothic decorative arts focused on two-dimensional representations of natural objects, rather than a realistic depiction. This was really a revolt against mass production that was taking over in Great Britain. Gothic Revivalists believed that a society based on craft was better than a society based on mechanized, but unskilled workers.

The Arts and Crafts Movement was a continuation of that idea. Whereas the Gothic Revival designers focused on accurately recreating the medieval designs, the new generation of designers was looking to take the spirit of the Gothic artisan and apply it to modern design. They too focused on the representation of the object rather than its depiction, but they were not bound to the past.

So who were these Arts and Craft founders? The big name was William Morris. As a young man at Oxford he read an essay by John Ruskin, a leading Gothic Revival architect, and a proponent of raising artisans to the level of artists in a militant rejection of tawdry industrial-made goods. Morris himself trained for a while as an architect before focusing on painting, was an excellent poet, revitalized the field of textile design, and ended up as a printer of illustrated manuscripts. In 1861, in association with several of his artist friends he established the decorative arts firm of Morris, Marshall, Faulkner & Co..

This firm did just about everything related to decoration, including the design and production of stained glass, carpets, wallpaper, carvings and stone work. By employing artists as artisans they were making Ruskins dream become a reality. Morris himself designed wallpaper, textiles, and tapestries, becoming an expert in the printing and textile fields in the process.

Morris led by forming and perfecting this firm, but it was left to others to give a more formal organization to the movement. It was a sign of the success of his influence that by the turn of the century 130 Arts and Craft movement organizations had been formed in Great Britain, and Morris was not directly involved in any of them. They arose out of the ground that he had fertilized.

Similar organizations started forming outside of Great Britain in the 1890’s. In 1894 theChicago the Arts and Crafts Society began meeting and in 1897 a Boston group sponsored an American Arts and Crafts exhibit. In the United States the dissemination of these ideas was mainly through periodic publications. The Ladies Home Journal started heavily promoting the movement in 1895, with the regular inclusion of articles highlighting Craftsman-inspired houses by architects like Frank Lloyd Wright, andWilliam L. Price.

In 1900 Gustav Stickley, designer and manufacturer of Arts and Crafts movement inspired furniture began publication of The Craftsman. In it he encouraged a type of do-it-yourself approach to the movement. He offered free house plans and helpful advice on designing for your own home.

Between The Ladies Home Journal and The Craftsman two types of house were popularized. The bungalow and the foursquare were both in favor with the Arts and Crafts movement, and starting showing up across the country. The architecture associated came to be called “Craftsman”.

There was a slight difference between the American movement and the movement in Britain. In America the movement was more about training workmen to become artisans, and with beautifying the home with the refined aesthetics of the movement. This in itself would improve people’s lives and make for a better society. This wasn’t so much fighting industrialization as making people better consumers of that industrialization by teaching them to participate in the decoration of their homes. In this regard it was probably more realistic and more successful then its British counterpart. 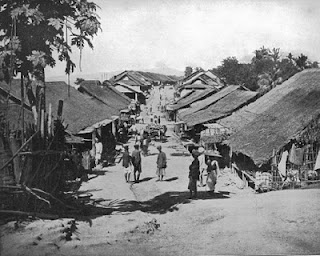 The Craftsman style is best associated with the Bungalow. The Bungalow was itself a form borrowed from India. It was essentially a long house with an open floor plan. As built in the United States it had many variations, including some that had multiple floors. It was probably the open floor plan that made it popular. This was a major change compared to most houses of the day, with their special purpose rooms closed off from each other. Today an open-floor plan is normal, but it was a big deal in its day.

There was a related movement in art and design that coincided with the peak of the Arts and Crafts movement. Art Nouveau was a worldwide style of art that is often found in Craftsman style homes. I stayed in a Bed and Breakfast in a Craftsman home that was originally decorated in the Art Nouveau style and had retained that style through the years. It is said that the movement began with the lithographed illustrations byAlphonse Mucha, a Czech artist, of the actress Sarah Bernhardt,in 1894.

The movement died out after WWI, but the Craftsman-style homes continued to be built up until the next war. Many of these homes were imitations of the form without the decorative qualities of the movement, but the lasting quality of the movement is that a homeowner today can return to the spirit of the Arts and Crafts movement and imbue that home with the beauty for which it was intended.

Has this article piqued your interest in Craftsman style homes? Click here to see my article on that subject.