An Argument for the Rediscovery of the Detached Garage

Detached garages are nearly extinct. But need it be? A detached garage connected with an enclosed walkway offers most the benefits of an attached garage, but avoids some of the problems

The problem of the front-facing attached garage is a problem of the cities and the suburbs. Narrow lots do not provide enough room to approach the garage from the side. So why do we have so many front-facing garages out in the country-side in places where the minimum lot-size is 5 acres? 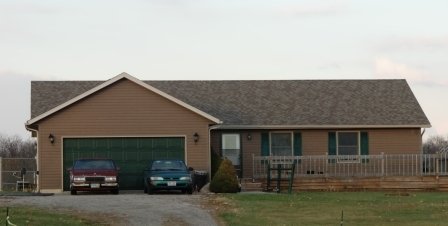 Why hide your house behind your garage when it isn't absolutely necessary? Compare the house above, to this small town, pre-World War II house. The house in town had a small lot, but it was obvious which was the master and which was the servant. The house gets the attention, while the garage is in the background. 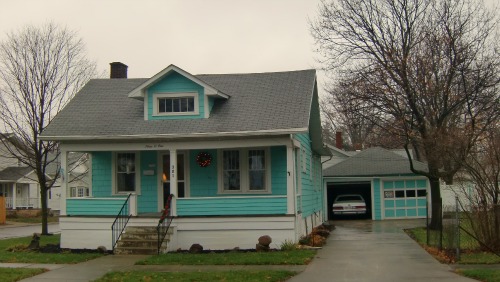 I blame stylistic inertia. People have become used to what they had in the suburbs. It has even become a standard, an ideal. So farmers build houses that look like suburban dream homes, and suburbanites move to the country and build what they had back in the development, only bigger. Speculative builders find that they can sell whatever they build so long as it has the same features as suburban houses, so they just build suburban houses.

I will admit that the problem is not quite as severe in the country for two reasons. First, houses are set back further from the road, so the garages are less engaging of the eye. A house that is 200 feet back is viewed in its entirety. You see the whole house first, then settle on the various parts. 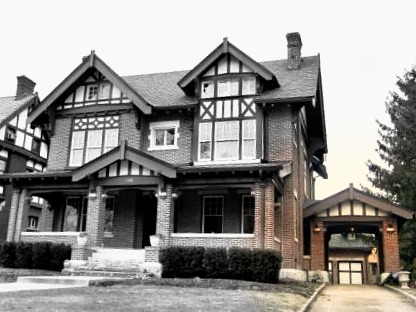 This is from an old neighborhood in Columbus, Ohio. You can see the garage way in the back. To get there is a little driveway running beside the house, but this has a covered dropoff area, called a porte-cochère which both frames the view of the garage and acts similar to a fence. It declares that the backyard and the garage are private. It is a delightful device that is rarely seen on modern homes.

Second, a man building in the country is less likely to build a narrow house. The garage may be large, but the house can stretch out to the side, so it usually presents its wide face to the road. The garage does not take up the majority of the view.

Nonetheless, why accept the problem at all when you have the room to do better? Here I will discuss detached and semi-detached garages, with a focus on the latter.

Detached garages are popular out in the country-side. Farmers have barns and silos and a host of specialized buildings, so what is one more. This ethic does seem to attach itself to those who relocate to the country. I have a friend who has a three-bay attached garage, a greenhouse, a 40x40 pole barn and is still running out of room. He has a two-income family with no kids and all this is to store his stuff: boats, cars, ATVs, tools, you name it, he has it. He is planning another barn.

In such an area a detached garage is a reasonable solution. My own garage is detached and holds one car. It is obviously insufficient for my needs, but it has a beautiful slate roof, so whatever plans I make will not involve demolishing this structure.

The advantage of a separate building is that you simplify the design and engineering of the house itself. Roof lines don’t meet. You don’t need to decide whether to include the garage in the main structure or treat it like an appendage. A separate garage solves several problems.

Which leads me to the semi-detached garage. Or is it semi-attached. The point is that it stands as a separate building but it connects to the house through some kind of walkway or covered porch.

If you are designing from scratch it is not too difficult to design such a connection. You have the luxury of siting the house, the garage and the driveway so that a connection is relatively easy. If those three items are already in place, designing an attachment can be rather difficult. For instance, if I were to connect my garage to my house I would either need to reroute my driveway, or build an underground connection to the house. Or move my garage. All these idea are rather complicated and expensive, so for now I just try to avoid the puddles. 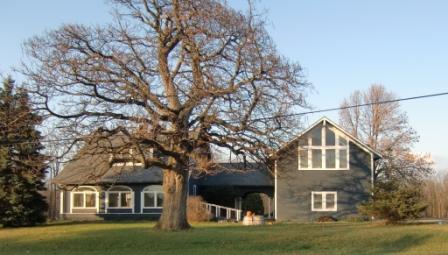 This detached garage is big, but it doesn't present the dominating garage doors to the front. The walkway, recessed from both the garage and the house, presents a pleasant counterpoint to the two larger structures and ties them together, both physically and visually.

Andreo Palladio connected his buildings with an open colonnade, but Palladio lived in Italy in the 16th-century. He didn’t have to deal with snow and his patrons did not expect a world free of the elements. For 21st century citizens of the northerly climes such a connection needs to have solid walls. If, however, the two buildings are close, connecting them with a wide-roofed porch might work. You will suffer from blown snow, but you will gain a covered porch which has its own advantages. 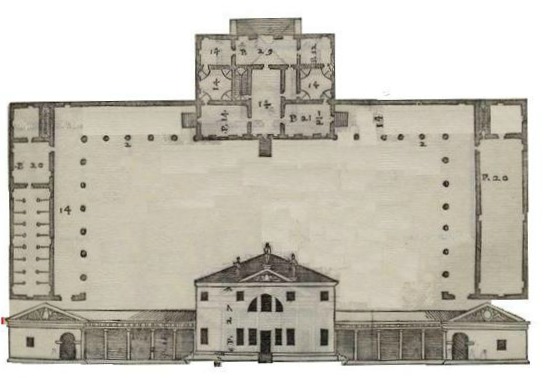 The above plan and elevation drawing by Andrea Palladio, from his book, The Four Books on Architecture, shows his scheme for connecting outbuildings to a main house.  A similar concept would work with a garage and a home.

An underground connection between the buildings might work, but creates a situation where you have to descend stairs on one side and ascend stairs on the other. This might be an acceptable alternative on rainy days, but in most cases I suspect people would just cross in the open.

Whatever the route or the mechanics of the building, remember the aesthetics of the solution. What you build should look appropriate to the house and the site. It need not be beautiful, but it should not detract from the beauty of the house itself.

Return to Top of This Page - Detached Garages

Return to the Garage Problem Page