Gothic Revival: A Spindle and a Stick Begat a Name

Charles Eastlake’s Gothic Revival book Hints on Household Tastes dealt with the decoration of the house, and especially its furnishings. Eastlake designed furniture which others made, and his book deals with the decoration of houses rather than their construction, but a comment he made regarding lathe-turned legs on furniture was misinterpreted in America as a suggestion that these be used on the exterior adornment of houses.

Thus the dominant characteristic of the Eastlake style is the spindle. In my research I have not discovered anything else that Eastlake specifically inspired in Eastlake Design homes. If any of my readers have more information on this I would love to know. Perhaps he had a dominant voice in decoration of the interior floors and walls, as he certainly had strong opinions on interior decoration.

However, I am getting ahead of myself. There was another technological innovation that presented itself that would help to drive the transition from Carpenter Gothic to the later forms.

Previously houses were built with a post and beam construction. Sawing the wood into planks was an expensive process, and nails were expensive, to the post and beam made sense. They were joined bymortise and tenons held together with a wooden peg. The use of steam and mass-production techniques made the use of thinner, lighter boards joined with nails a feasible means of constructing a frame.

Builders eventually developed the balloon frame, which is very similar to what you see today. It used 2x4's as the basic unit of construction. This light framing also made it easier to create complex house shapes. With post and beam it was no easy task to join a gable to a roof line, so the gables were minimized. With balloon framing this was easier. Architects soon began to take advantage of the opportunities this afforded.

It is strange, but the introduction of balloon framing, coupled with cheap planks from sawmills led to a style that imitated the post-and-beam look. Builders started placing planks over the lap siding that imitated the vertical and diagonal boards you would find in half-timbered houses. This faux framing gave the houses a distinct appearance. A later architectural historian would call this the "Stick" style.

It was stick houses that first received the benefit (or the curse) of Eastlake's spindles, so sometimes the Eastlake style is confused with the Stick style, but the Eastlake decorative look was just as often applied to the Queen Anne style that came along shortly after the Stick style.

Some sources credit the pattern books of Gervase Wheeler and Henry Cleaveland with spreading this style. Wheeler wrote Rural Homes in 1854, followed by Homes for the People in Suburb and Country in 1855. Cleaveland published Village and Farm Cottages in 1856.

I can attest that I could find nothing in any of the above books that hints at the Victorian Stick. The designs are either typical Gothic Revival or Italianate. However, Page 409 of Homes for People does give a verbal explanation of balloon framing. This is the first published account detailing how to use this method that I have come across, but I admit there are a lot of pattern books that I have not seen.

Perhaps the real protagonist was Andrew Jackson Downing. In his Gothic Revival book Architecture of Country Houses on page 127 he has a drawing of a Swiss-style cottage. This chalet has fish-scale shingles, divided periodically by vertical boards, two staples of the later styles. 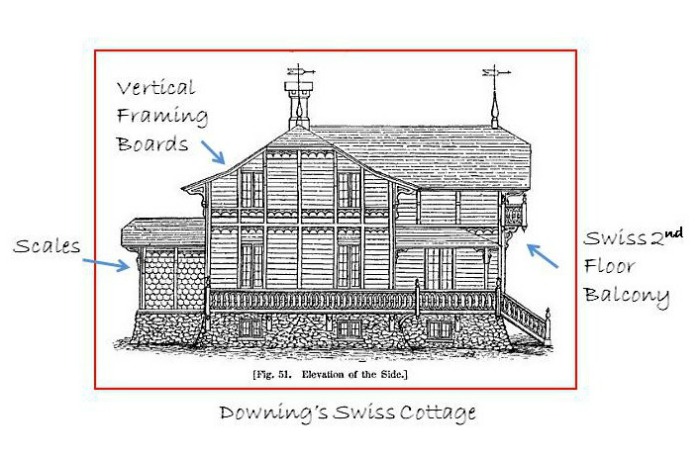 Whatever the case, houses in the Victorian Stick-Eastlake style did precede the Queen Anne style by a few years. Richard Morris Hunt designed a house for J.N.A. Griswold that architectural historian Vincent J. Skully, Jr. considered the first house to display the matured Stick design. This was in 1862, before Eastlake’s book. The house gives the appearance of being half-timbered, but not quite belonging to the Tudor style. This half-timbering look is actually a little over-done compared to most later stick houses, which toned-down the use of contrasting framing boards. 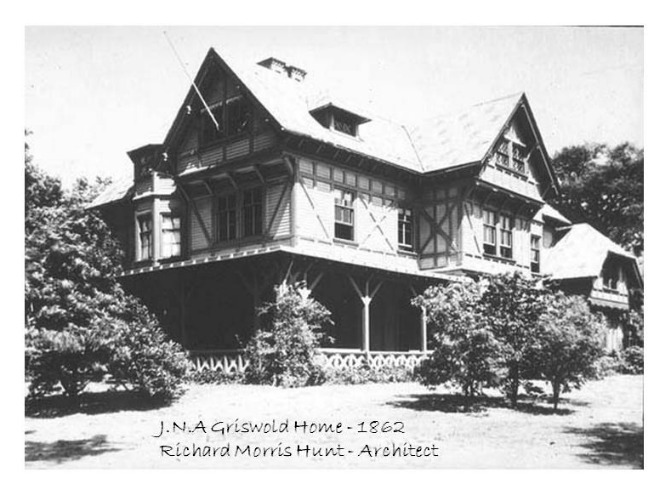 The Gothic Revival: The Queen Reveals Her Finery

Do you remember the kerfuffle over the Eastlake name being applied to the Victorian Stick? The Queen Anne style has a similar story behind it. It has nothing to do with Queen Anne. It was originally applied to a style of house designed by Richard Norman Shaw in England, a return to a later variant of the Tudor house arising from the time of King James. This was certainly in the spirit of the Gothic Revival, but had little to do with cathedrals. This style came over and morphed into the Queen Anne Victorian style with all the shingles.

Shaw kept on designing, eventually dropping the whole half-timbered look, but his houses kept the Queen Anne name. Queen Anne houses in Britain bear the mark of his later designs. In America there are some urban row houses bearing that name. The only connection I can see between the two styles bearing the Queen Anne style name is the use of bay windows on both the urban and suburban varieties.

From what I have been able to piece together here is what happened. Shaw experimented in vernacular style houses, ignoring the mainstream of the Gothic Revival, looking back to Tudor and Jacobean houses. His early houses were half-timbered, with scale-like shingles applied to places that were not half-timbered. This style was first built in America by a remarkable architect named Henry Hobson Richardson in Newport, Rhode Island in 1874. It had a large gable dominating the front and the second story projected out a little bit. It was shingled on the upper floors, but between the windows it was half-timbered. That is to say you had one face of a timber beam exposed and plastering (I assume) in between the boards, much as you would have seen in the England of King James. It is interesting and it has some of the design elements that you see in the American Queen Anne style, but this early version looks far more European than the later versions. 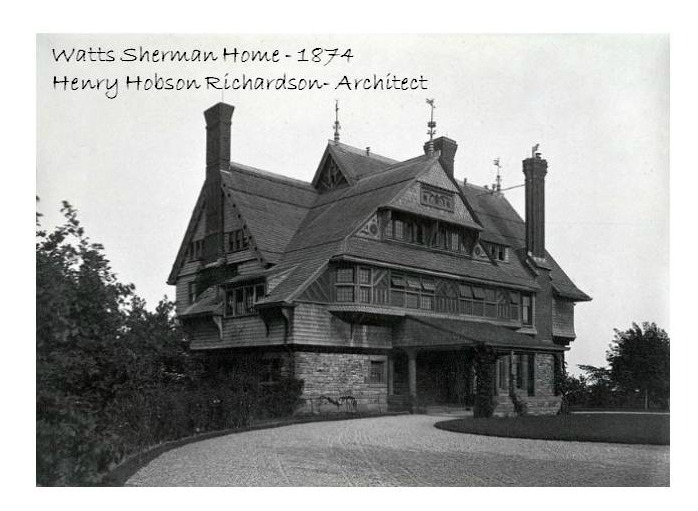 Perhaps that was because later architects worked off of a pattern book showing the house, but a lithograph of the house may have given a false impression of its appearance. Anyway, the shingles were carried over, and the half-timbering was suggested by the contrasting planks found in Stick style houses. Both styles often have overhanging projecting gables. So its easy to see how the Watts Sherman house is considered to be the first American Queen Anne house. You can also understand the Gothic Revival connection, since vernacular houses that inspired Shaw were of Gothic origin. 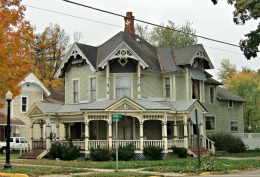 No matter the roots of the Queen Anne Victorian and Stick-Eastlake design, I think their form really came about from the application of a lot of people’s ideas in a time when increasing wealth led to increasing extravagance. These two styles have more in common than they have differences. And they say little that shout out Gothic.

Thus the Gothic Revival dissipates. Its success becomes its undoing, at least within the residential markets in the United States. The experiments in architecture that it sparked led to forms in which the Gothic was no longer the dominant inspiration.