Ideal or perfect proportions is a term we bandy about. We refer to someone as being well-proportioned if we deem them to have a beautiful body. All these terms suggest that some proportions are better than others, and that there might be an ideal proportion, or a series of such perfect proportions. If so, then art and architecture which employs these proportions should be more pleasing than that which did not. 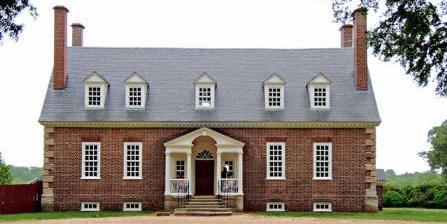 Gunston Hall is an example of the classical architects use of repeating proportions. Here the proportions 1:2 and 3:5 are used in the prominent shapes of the house.

In classical architecture there was an understanding that proportion, the relationship of the size of one object to another, should follow nature’s example. The example that the architects of antiquity most often followed was man. The ancients theorized that man was acclimated to certain proportions that surrounded him and above all things he was acclimated to the proportions of his fellow man.

They viewed nature broadly, and included mathematics and music in their understanding of nature. Out of this flowed theories of proportion based on the harmonies of music, and the properties of certain critical numbers and number sequences.

Today, after decades of an escape from these principles, man is returning to the idea that what is pleasing to the eye in nature will also please the eye in our own constructions. Many modernists rejected the formulas of the past, throwing out classical proportions in their effort to build for a new man.

It turns out that the new man has similar tastes to the old man, and the modernists failure to come up with a replacement for classical proportions has led to renewed interest in an old idea.

In this series of articles we will look at the search for perfect proportions in classical architecture, what authorities from antiquity and from the Renaissance wrote about those proportions, and how we can apply them to our own houses.

Order of the Articles

To present this information as a coherent whole is difficult, as there were several different ways at arriving at a system of perfect proportions. We will examine those that I am aware of each in its turn, then take a look at how the Greeks applied these to their temples and finally try to tie this all together.

It is quite possibly going to take more out of me than I have in me, so let me apologize in advance. I will point to some other resources that can help you better understand this topic, where I cannot do justice to the topic.

Here is how I have organized this information:

Along the way we will meet a few people. I will give you a short introduction here.

Pythagoras – A Greek philosopher and mathematician. To him math and philosophy were the same subject, for math explained God, the Universe and man.

Plato – A Greek philosopher who was also a great writer. It is through him that we know Socrates, but also, of concern here, how we know Pythagoras. Plato introduces the Pythagoran understanding of the soul and its proportional relationship to God in his book Timaeus and Critias .

Vitruvius - A Roman engineer and architect who wrote a series of ten short books for Caesar Augustus, in which he explained much of what was known about architecture in his day. There were earlier writers, but his books survived and through him we know the ancient architects. Click here to see his book 'Ten Books on Architecture'.

Alberti – The ultimate Renaissance man, Alberti explained Vitruvius to a new generation, but added considerable genius in his books about architecture. Click here to see On the Art of Building in Ten Books

Palladio – A practical architect who knew how to build great estates, he also popularized much of what Alberti and Palladio espoused. This guy was the first to start throwing Greek porticos onto the front of houses. See his book The Four Books on Architecture

Vignola - like Vitruvius, a synthesizer of what others had espoused. His version of the classical order of columns became the standard that Renaissance architects followed after he published his book Canon of the Five Orders of Architecture.

Return to Top of This Page - Perfect Proportions