Proportions and The Classical Orders 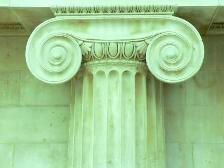 An Ionic Capital
The classical orders are the proportions used in the columns of Greek temples. When the Greeks built temples the floor plans would usually follow the proportions discussed previously, but they also spend a lot of effort in getting the columns to have certain proportions. Part of this was practical. If the columns were too narrow, or too far apart, the temple would collapse. Most of it was aesthetic. The columns were highly visible. They needed to look good.

Remember, this went back to their ideas that all creation was made to be in harmony with the creator. If they were going to honor the gods they had to bear this in mind and make their temples according to harmonious proportions 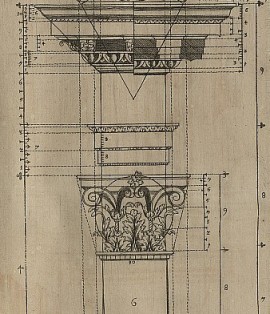 Proportions of Corinthian column from Grundtliche Darstellung by Abraham Leuthner
The size, spacing and decoration of the columns eventually settled down into certain patterns that seemed to work well. Vitruvius spends several chapters discussing temples and what he refers to as the order of columns. In Greece there were three different orders, Doric, Ionic and Corinthian. The Romans added to these, but originally there were three. Each had their own set of proportions, and once you picked a column order you were expected to adhere to those proportions. There were plenty of temples where some experimenting went on and so not all temples were built this way, but overall the pattern was followed. 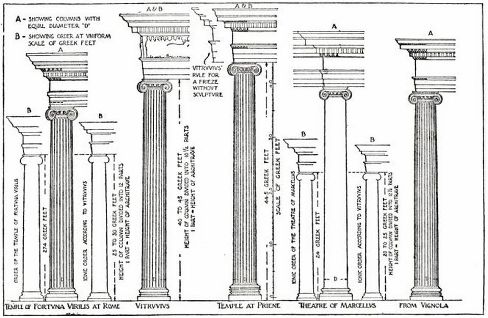 The Classical Orders on a Pedestal

While the Greek classical orders did not make use of raised pedestals, and only rarely did the Romans use them, the Italian Renaissance architects developed the idea that columns should have pedestals. From the time of the Renaissance on column orders consisted of the column, the pedestal it rested on, and the entablature at the top. The column was further divided into the column proper, the capital and the base. These latter two helped to spread the load that the column carried, but they also added decoration to the column. The pedestal also had its base, while the entablature would be divided into the cornice, the frieze, and on the bottom, the architrave. 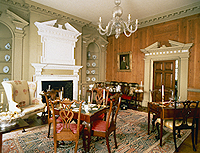 Gunston Hall
Now, why should this matter to your house? When you look at rooms built in classically inspired homes, for instance Gunston Hall in Virginia, you will find elaborate molding at the top and bottoms of the wall. If you are used to a modern house with its little three inch strip of molding, this may seem excessive. However, what the William Buckland, the architect of Gunston Hall, was actually doing was replicating in the room the basic proportions of a Greek column.

The Renaissance architect Giacomo Barozzi da Vignola, or Vignola, in his book, Canon of the Five Orders of Architecture

puts the proper proportion of pedestal to column to entablature at 4:12:3. This was a simplification of the various descriptions of the orders used by previous writers, and its simplicity made it popular. Most classical architects following Vignola would use these basic proportions.

The Classical Order Comes Inside 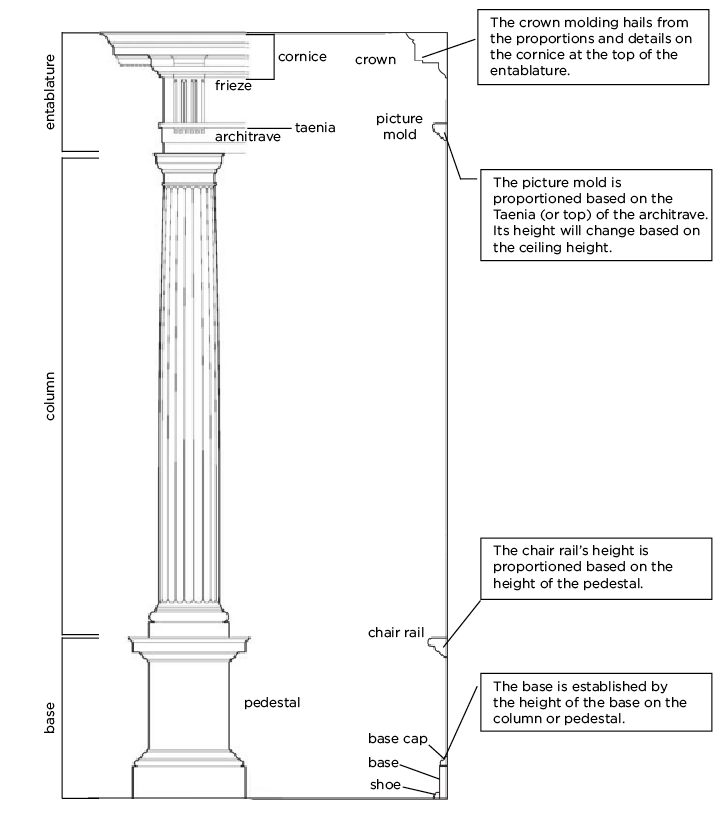 Comparison of Moldings and Columns
Click on Graphic to learn about moldings from the master, Brent Hull
The moldings used in Georgian homes like Gunston Hall would be sized to fit into this scheme of proportions borrowed from the classical orders. The cornice moldings correspond to the cornice of the entablature. These homes often had a picture rail, and it would be place to correspond to the taenia, a small projecting drip molding separating the architrave from the frieze. Somewhat below waist level there would be a chair rail, placed at the level of the top of the pedestal. Down by the floorboards we find the base molding at the level of the base of a classical pedestal. The shapes of all these moldings tended to replicate their corresponding part of the column, so the cornice molding will usually have a profile similar to what you could find on the cornice of a Greek temple.

This system enforced a certain amount of proper proportion onto a room. Even a room that was not itself well-proportioned would have a well-proportioned pattern on its walls. The breaks added visual interest to the wall, but this could have been done with these visual stops put anywhere. By placing them in a pattern that is pleasing the whole room becomes more harmonious.

It is common in modern houses for the chair rail to be placed too high. This is either done from ignorance, or because a higher rail better meets the back of a chair. So there may be a practical reason for its placement, it still makes the room seem awkward, rather like the man who has his belt over his belly. It holds his pants up better, but we all think he looks a little foolish. Or, more commonly today, his pants are below his rear end, which is both awkward and impractical.

This whole system of classical orders, borrowed from the Greeks, tends to be multiplied throughout a classical room. The moldings around windows, fireplaces and doorways will bear this imprint.

Today, for the sake of clean lines, simplicity and cost our moldings have been stripped away or reduced to thin strips. I will not argue that this is always wrong, merely that something is lost.

A modern house could make up for this in multiple ways. It could have a two-tone paint job, replicating the division that a chair rail introduces. The white paint of a ceiling could be brought down onto the wall at a level matching a proper cornice, or even to the level of the picture rail. It could also use proportions that are classical, but don’t necessarily match the scheme used for Greek columns. But typically this is not done. Walls are bare, or the visual breaks are lacking in coherence.

I have not done justice to this topic so I am going to point you to the best resource I know with regard to the use of moldings in classically proportioned rooms. This is an audio webinar with a powerpoint presentation accompanying it, put on by Brent Hull. I don’t know Brent but he has a website from which he sells his moldings and consulting services. 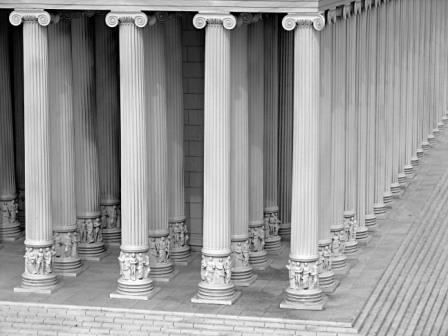 To Top of Page - Classical Orders

To Proportions of Music

To Proportions of Man