Most window shutters are decorative. They are put on the house because they look good, not because they protect the windows from the storms. As a result some architects and builders get a little sloppy.

In other cases it is the homeowner at fault. They put up shutters that aren’t appropriately sized for the window. The result is a window that looks awkward. You may not be able to identify what looks wrong, but you get an uneasy feeling when you look at the house.

The problem is minor, but since the shutters are often a contrasting color, this minor problem often has a major impact.

The sizing problem can occur in two dimensions. The shutters need to be a little taller than the windows. Most houses get this right.

Does this really matter? Well, probably not if you are close, but if the difference is severe enough that the eye can pick it out, chances are it will look a little awkward to some people. 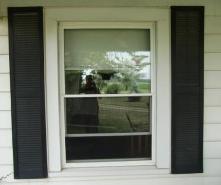 These are my shutters on my window. They are definitely wrong.

Here is my confession. My house has shutters like this. They are the ones on this page. I know I should replace them, but I also want to reside the house, re-insulate, and do a host of other things that should be done all at the same time. So, like I have been for the last 14 years, I am waiting until I have the time and money.

Want to see a great article on shutters? Check out what Ken the Old House Guy has to say on this subject.

One problem I have with these windows is the wide frame they put around the windows when they sided the house. It is awkwardly wide. So any solution to my shutter problem should involve moving the shutters in closer to the glass. The shutters also seem unnaturally tall, since they are sized to match the wide frame. So fixing the shutter problem requires a change to the frame, which will have to wait until I re-side the house.

An alternative is to remove the window shutters. My house is a four-square home with a general Craftsman feel. Craftsman homes generally lacked window shutters, so I’d be on solid ground to forego them. On the other hand these foursquare homes are common around here and most have shutters. I think, perhaps, with a little color to the house the structure won’t seem so plain and the house will look good without the shutters.

Now, if I can just scrape the money together to re-side my house.

To Top of This Page - Window Shutters

#1 Big Porch Columns That Add Nothing to Your House

#5 Natural House Lighting on Only One Side

Tell us what makes your top 10 list, or tell us about one of the ones we posted. Maybe you have examples. I would love to add more pics to my articles.

Kim Not rated yet
How about taking the shutters off and using window boxes for now? Luscious flowers and plants will complete those windows beautifully, and in the colder …