What was the Art Deco style?

Let us start with this:

Art Deco is a style of design that dominated the decorative arts for a period of about 15 years, but it was active before it was popular. Perhaps we can put its lifespan at about 40 years.

Art Deco isn’t a term that its early practitioners would recognize. The term was not used to describe this movement until 1966 when an art historian found it convenient to coin a term to describe the artistic style that developed in the 1920’s and ‘30’s. However it was a term drawn from the name of a collective of artists that formed in Paris in 1900, “La Societe des artistes decorateurs”. In 1925, to celebrate 25 years of activity the society sponsored an international exhibition, and that was the turning point. To use a current term, that was when it went viral.

Don’t get it in your head that this group plunged headfirst into the Art Deco style shown in the pictures above. Art Nouveau was still going strong at that point, and was less than 10 years old. One of the founders of the society was Hector Guimard, a leading architect in the Art Nouveau movement. It is more a case of Art Nouveau changing, and the principals in that movement started getting influenced by a lot of other things happening in the world of art.

Cubism, Futurism, Constructivism, and a handful of other movements, were all breaking free from realism and racing towards various forms of representational expression. Cubism is an interesting style for painting nudes ascending staircases, but it gets a little clumsy to have a Cubist tea set. The Art Deco style (and Art Nouveau before it) was more accessible and a better vehicle for the application to practical tools of everyday life, such as furniture and door knobs.

But the Art Deco style was highly receptive to influences from these other styles. Art Deco is Art Nouveau after the various artists had their brains worked over by Cubists and Constructivists. It also borrowed from ancient graphical arts. Archeological discoveries were big news and design motifs from the Egyptians, Babylonians, Aztecs and Mayans all found their way into the new design language.

The Art Deco style was a continuation of Art Nouveau’s break from the past, but where Art Nouveau celebrated the curve and nature, Art Deco celebrated the machine and movement. The line was still central to the art, but it moved from the flowing and curvilinear to straight and angular. Curves weren’t eliminated but they became geometric and rigid, where previously they had been flowing and free.

I simplify, of course. Life is a lot more complicated. Frank Lloyd Wright was decorating with Art Deco geometric shapes well before most of the artists and he credited the geometric blocks that his mother bought her children, so Picasso and King Tut were not the whole story.

I read an article where it stated that Art Deco was a vulgarization of Cubism, as if Cubism was some type of grand ideal and Art Deco the proof of our inability to attain that ideal. What silliness. Art Deco is not art lost, but art in motion. It is a thousand artists trying to find what works for them and what works for the people who will buy their art.

Whatever the cause, the art changed. Artists changed. The public tastes changed. Somewhere, shortly after the end of World War I ragtime changed to Jazz and Art Nouveau was passed over in favor of Art Deco.

The Art Deco style was the big thing until around the end of World War II. That is a convenient way to bracket the movement, World War I to World War II. However, it is fair to say that the art changed within that time frame. The Art Deco of the early years differs from the later years. 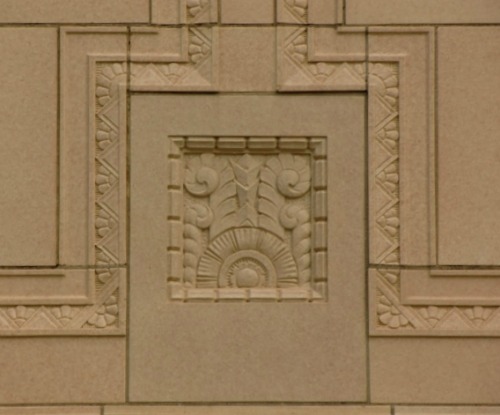 Art Deco sometimes imitated classical themes but with an edge. Here we see leaf patterns and volutes, a traditional motif, made modern and geometric. This comes from Will Rogers Highschool in Tulsa, Oklahoma, which has recently been restored.

As it progressed it simplified, becoming less cluttered. The streamline aspects became dominant, and streamline implies smooth surfaces. There is a type of art called Streamline Modern. Many people classify it as Art Deco, others say it is something new and different. The truth is that it is part of continuous line running from Art Nouveau up to Modern. It is not a straight line. You would not have predicted Modern aesthetic when Art Nouveau first arose, but art progressed from one to another. 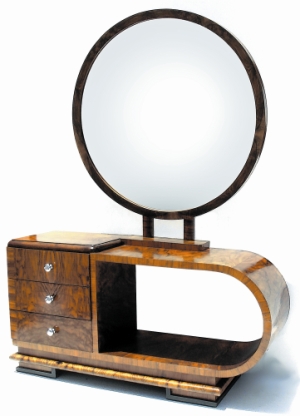 Art Deco at its simplest. You can see how Art Deco provided the lead in to modern furniture.

The simplification of surfaces and subject that came about with Streamline, simply worked its way out until even the stream lines disappeared and there was only form and shape, and that is the Modern aesthetic.

But I have lectured too long. The Art Deco style is best experienced visually. I have assembled my own little virtual gallery below. 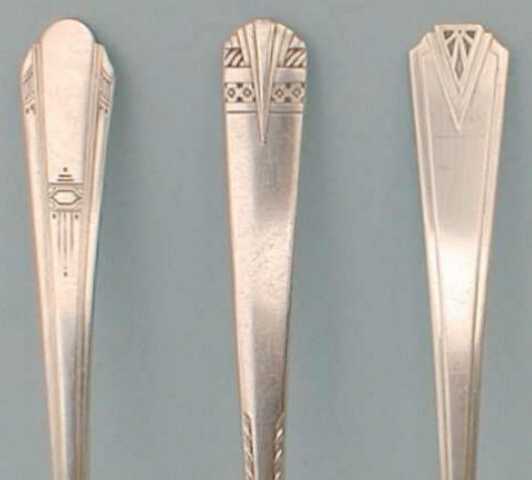 Art Deco found its way into the kitchen and the dining room. It was a popular style and merchants responded accordingly. 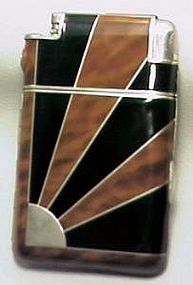 In an age of smoking cigarette lighters were a personal appliance that many carried with them. Here the sunrise pattern shows the power of geometric simplicity. 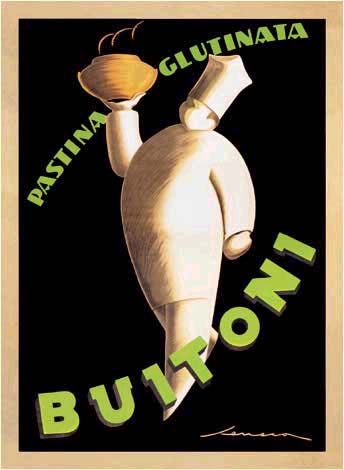 The world of advertising was kicking into high gear when Art Deco hit. Most advertising wasn’t Art Deco, but it provided opportunities for some great art as shown by this Buitoni Pasta advertisement by Frederico Seneca. 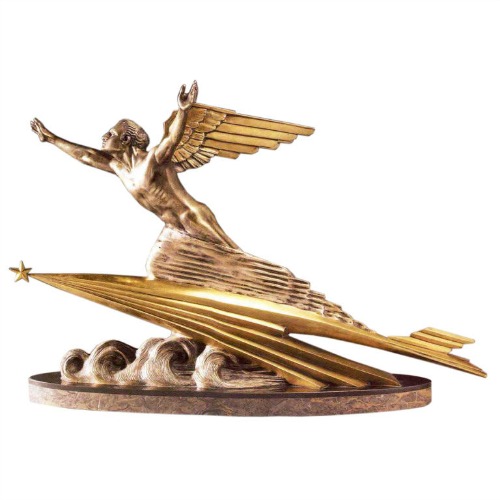 Speed and motion became a common theme in Art Deco. This would evolve into Streamline Modern. 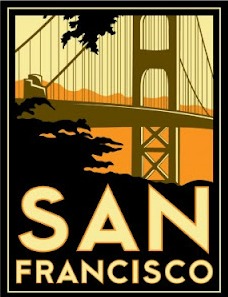 What is a great destination without a great postcard? 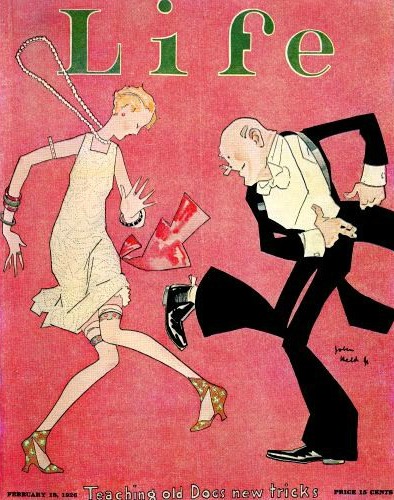 To Top of this Page - Art Deco Style

To Art Deco Houses - What Art Deco houses look like

To Art Deco Gargoyles and Guardians - An interesting collection of statues

To Art Deco and Archaeology - The archaeological influences on Art Deco

Art Deco Architecture - How Art Deco and Classical come together