Chimney aesthetics sounds like an oxymoron. We are talking about a flue designed to carry smoke and noxious fume away from the house. Just how "aesthetic" can it be?

A chimney is a functional utility of the house, yet it can also be quite beautiful. In the past architects have used the chimney as a means of adding to the beauty of the overall design of the house. 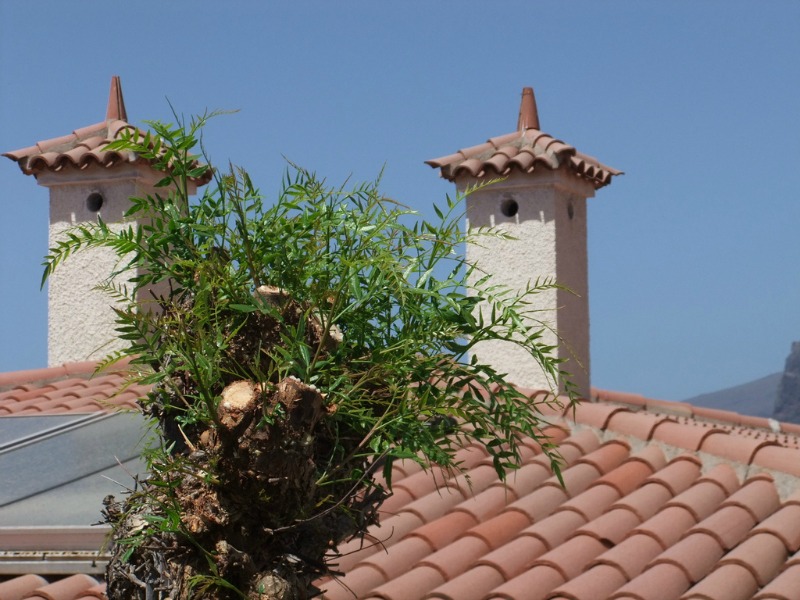 Chimneys don’t always add to the overall appeal of a house.  An overall understanding of the importance of chimney aesthetics has to be considered from the outset.  If the chimney is just considered as a functional utility chimney design will probably reflect that and an opportunity will be lost.  Worse, an ugly chimney may stand as an eyesore for decades to come, detracting from the beauty of the rest of the house.

Chimneys that looked tacked on and are at odds with the rest of the house design will probably fit into this ugly category.  Chimney design that ignores balance, symmetry and proportion will also end up as a fail.  Architecture requires planning and balancing of all the various aspects.  Chimney design is part of that.

A large stone or brick chimney, with its corresponding mass, can add the sense of solidity of a house. With its vertical connection down to the ground it can visually anchor the house. This is especially true where the chimney broadens as it goes down.

Many houses forego chimneys altogether.  Vent pipes take their place.  These are much less visually intrusive.  Here the question of chimney aesthetics is avoided, but implicit is the idea that the house looks better without a chimney.  It simplifies the lines and avoids complications.  In many cases that is probably correct.

While I am not a fan of entirely fake chimneys I do favor sizing the chimney with a consideration to the chimney aesthetics.  This means that you might create a chimney substantially larger than the pure engineering considerations would require.

In the previous page we looked at placement from a functional standpoint.  Aesthetics might also affect your placement of the chimney.

Chimneys are a bit of a design bother no matter where you put them, but if they are on the interior of a house you can always hide them behind a wall.  Houses on the exterior are not so easy to hide.  If you are going to have an an exterior chimney then you need to take advantage of it as a design element.

Done well the exterior chimney adds solidity to the house and contributes to the balance and symmetry of the house.  Done poorly it is an eyesore that doesn’t belong with the rest of the house.

Exterior chimney are often located on an end wall.  Where there is a chimney there cannot be a window, so the window and chimney placement has to be coordinated. If the chimney has a common skin with the end wall the chimney will tend to blend in.  Where it is a strongly contrasting material it is likely that the chimney will look tacked on.  A contrasting color isn’t always a bad thing, it is just an additional challenge when trying to integrate the chimney design into the overall house design.

Where materials differ, whitewash or paint on the chimney may allow it to blend in with the house.  If the materials can be thematically related, then the contrast may actually be an advantage.  A stone chimney will usually go well with a log cabin despite the contrast, because both materials are natural.

Diapering on brick chimneys can provide pattern and interest to what might otherwise appear to be industrial or utilitarian. Recessing sections of brick work can create depth and texture to the surface of the chimney, creating interesting shadows as the sun moves through the sky.

Chimneys were often topped with decorated chimney pots. Today the chimney caps, turbines and screens we tend to place on the top are useful, but tend to look rather ugly. An alternative exists by looking to the past. Take a cue from the chimney pots and make the mundane look beautiful.

In older houses it was common to have multiple chimneys. While this would be an extravagance today it can provide some interesting opportunities for the architect. Multiple chimneys extending well above the house will draw the eye upward. Placed in a regular pattern they can reinforce the overall symmetry of the house. 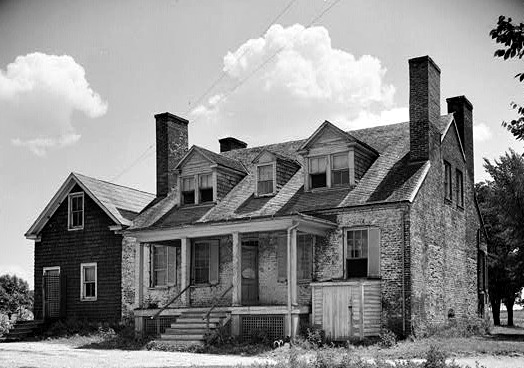 I know I just used this photo on the other page but it is such a great house!  The chimneys move this house to the next level.  Note how much taller they are than the house.  Anything over the ridge of the roof is just for show.  By extending the chimneys the extra distance the chimneys become a dominant feature in the house and reinforce the symmetry offered by posting chimneys at each corner.

On the interior of the house an exposed chimney can provide an interesting counterpoint to the smooth walls of a room. A fireplace will serve as a focal point for the room and its decoration can set the tone for the rest of the interior.

In my house the chimney is hidden behind plaster walls, but in houses where they are visible chimneys provide designers a great opportunity to use the basic structure of the house as part of the decoration. This is probably more welcome in houses with a rustic theme, or Craftsmen homes with exposed beams. Its rarity in homes of recent generations is really a benefit, as a house with an exposed chimney stands out from the average.

In some houses a massive stone fireplace becomes a divider around which various living areas are arranged. On one side there might be a great room, on the other side a formal dining area or a kitchen. In the open flow of modern houses these are usually informal divisions. In the old Cape Cod houses the central fireplace terminated the opening hallway and on the opposite side became the center point of the great room / kitchen area, where most of the family could gather in warmth on those cold New England days.

To those who are initiating a building project I encourage you to consider the chimney not as an afterthought but as one of the important design considerations. For those with an existing home consider your options for improving how your chimney adds to the aesthetic values of your home. 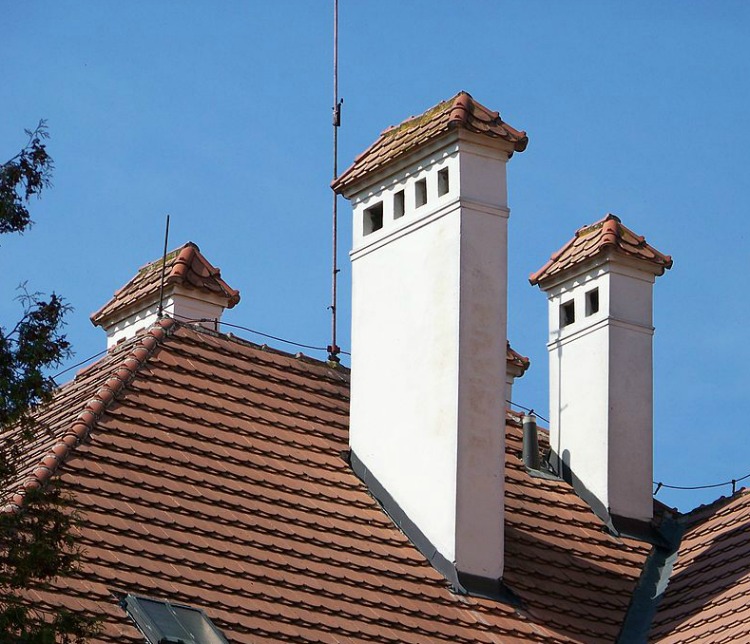 Very simple, it blends in perfectly with the stuccoed walls and Spanish tile of the house.  Here is an example how chimney caps do not have to look industrial.

What can I say.  I like fancy chimneys.  They are just fun to look at. 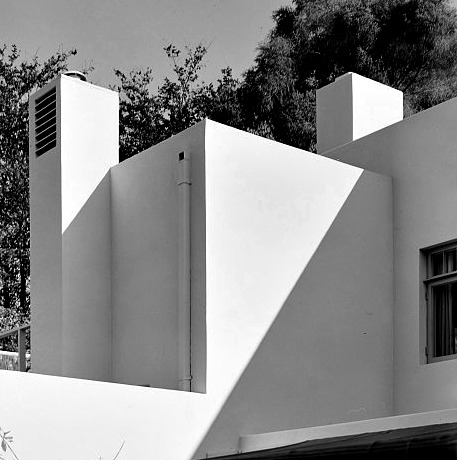 The picture above shows the possibilities when incorporating chimneys into a modern structure.  Modernists homes are all about shape and mass and the cube shape of the chimney plays well in this environment. 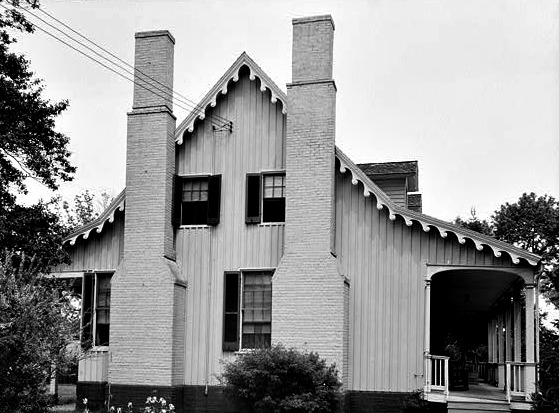 Here is another example of a placement failure.  Although the painted brick goes well with the siding the crowding of the windows makes this awkward in the extreme.  Windows centered in the gap would have looked much better, although that may not have worked internally.

To Top of Page - Chimney Aesthetics

Back to Chimney Design