The root of Modernist architecture is Modernism, and Modernism involves much more than architecture. It was an outlook on life that arose out of a reaction to and because of the changes in society. Industrialism was creating major disruptions to society at the same time that it was creating new opportunities. 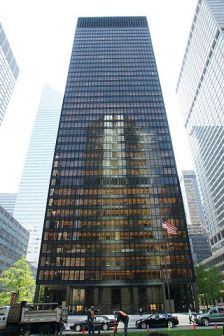 The Seagram Building is an example of the International Style, the Modernists endpoint in their evolution.

What people think in this age is often a reaction to what people thought in the previous age. So it was then and modernism was the result. In art it was a refutation of natural forms and realism in favor of a search for a more elemental understanding of art. They experimented with color and shape and arrived at abstraction and surrealism. In architecture modernism took the form of a reaction against any style of the past, against any ornamentation, and against any falsity or pretension. It moved towards simplicity and embraced industrialization.

Modernism was also a very positive and humanistic philosophy in that it believed man and society could be perfected. Education and technology and industrial development were all to play their parts, as was architecture.

People recognized that there was a distinct shift in man’s prospects. Whereas change in the past had been a gradual improvement over tradition the theory of the day was that man needed a dramatic shift in the way he lived. The forms of buildings and housing suited to their fathers no longer made sense. A modern man needed modernist architecture suited for a modern way of life.

While it would be wrong to say that modernist architecture was a politically inspired many of its chief movers were. Socialism was widely accepted in intellectual circles and modern architecture was seen by its proponents as the solution for affordable housing for the working class.

Modernist architecture borrowed from Vitruvius the idea of “Convenience” under the catchphrase “form follows function” and from Ruskin the ideal of “Truth”. They specifically rejected the continuation of the craft system and Ruskin’s lamp of “Life".  Consider point 6 of the La Sarraz Declaration:

“6. Following the dissolution of the guilds, the collapse of the class of skilled craftsmen is an accomplished fact. The inescapable consequence of the development of the machine has led to industrial methods of production different from and often opposed to those of the craftsmen. Until recently, thanks to the teaching of the academies, the architectural conception has been inspired chiefly by the methods of craftsmen and not by the new industrial methods. This contradiction explains the profound disorganization of the art of building.” (Translated by Michael Bullock.From Programs and Manifestoes on 20th-Century Architecture.The MIT Press. Cambridge, MA: 1971)

The La Sarraz Declaration was a manifesto put out by a group of the leading European modernist architects in 1928. Most of its content was a complaint against the current system of architecture and the academies that perpetuated it.

In rejecting craftsmen and embracing mass-production of housing in an industrial fashion they weren’t really directing events, they were merely understanding the times. But they made some other choices that took us in directions that weren’t inevitable. 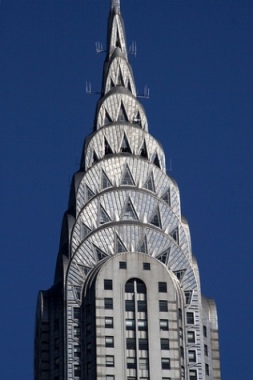 This is the Chrysler Building. It is designed in the Art Deco Style before the Modernists abandoned all ornamentation.

As a general rule, they rejected ornamentation. This was not apparent at first. Attempts were made to apply new styles of art to the enrichment of the buildings they created. Art Nouveau and Art Deco, in their turns, were both used as decorative schemes with as much detailing and care as any Classical or Gothic architect would offer. But eventually the idea that the shape and texture of a building could create interest enough led to a rejection of ornamentation.

While their have been many architectural theorists there have been no single voices that have stood out or stood the test of time like Ruskin or Vitruvius. I have no Seven Lamps I can offer as embodying a philosophy for modernist architecture. Instead what I offer is my own distillation based on observation and what I have gleaned from their writings:

These architects were sincere in their beliefs. They strove to make the world a better place through their buildings and housing. They earnestly strove to make designs that enhanced the functions of living. Some of it was successful. Some was not. 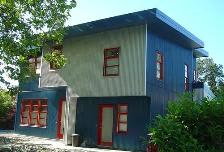 However the greatest indictment of modernist architecture is aesthetic. The industrialization of housing and offices coupled with a rigidly applied concern for function over form led to a lot of boring boxes. They were certainly more successful in the world of commercial real estate, but still boring. In the area of residential architecture people voted with their pocketbooks. Except, perhaps, in the upper end, modernist houses were unsellable. People preferred traditional styles.

Modernist architecture rejected tradition, but society is largely based on tradition. Even the new modern man was wanting to cling tightly to his past.

As always, there was a reaction. Really two reactions going in different directions.

One a return to traditional values but with modern materials. The other a plunge into nihilism.

What do you think about Architectural Philosophy?

What is your take on Classicism, Modernism, or any other major architectural movement? Add to our conversation. Tell us what moves you or what turns you off.

Thank you so much for sharing your knowledge for free. As a self taught designer (i hold a Bsc in quantity surveying), it's invaluable. I have a particular …

It is my considered opinion that here in metro Atlanta, Georgia, much of the contemporary commercial exterior design should have been never built. Currently …