Postmodern architecture is the name given to the dominant movement to arise out of the reaction to Modernist architecture. 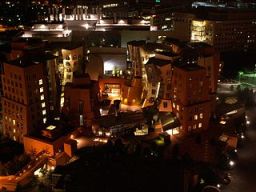 The Stata Center at night. A Postmodern building. Note the angle of the walls.
Postmodern, like Modern, has meanings well beyond architecture, and it is helpful if we take a step back and consider its broader definition.

First, it is a reaction to Modernism. Modernism was focused on science and progress and objective truth. Postmodernism questions the meaning of truth and progress.

Second, Postmodernism is a worldview. Since it doubts the existence of a underlying truth, what we consider truth is based on the meta narrative which we ourselves are a part of. Since there is no truth there are only choices and preferences. Postmodern critical thought seeks to deconstruct these meta narratives and reconstruct them to a preferred state.

The problem is that what is preferred isn’t necessarily better except in the context of some other meta narrative. Even our language is part of the meta narrative. In a Postmodern understanding of literature the text only has the meaning that the reader receives. The author’s intent is not considered.

Some architecture is given the title " Postmodern architecture " to mean it has rejected modernism and includes ornamentation and pays homage to past forms. In other cases the title implies that the architect has based his work on a Postmodern worldview. It is this latter form of postmodernism,sometimes called deconstructivism, that I vehemently oppose.

In a famous debate between Postmodern architectural theorist Peter Eisenman and architect Christopher Alexander, Eisenman made the following comment:“I guess what I am saying is that I believe that there is an alternate cosmology to the one which you suggest. The cosmology of the last 300 years has changed and there is now the potential for expressing those feelings that you speak of in other ways than through largeness -- your boundaries -- and the alternating repetition of architectural elements. You had 12 or 15 points. Precisely because I believe that the old cosmology is no longer an effective basis on which to build, I begin to want to invert your conditions -- to search for their negative -- to say that for every positive condition you suggest, if you could propose a negative you might more closely approximate the cosmology of today. In other words, if I could find the negative of your 12 points, we would come closer to approximating a cosmology that would deal with both of us than does the one you are proposing.”

In that debate, Alexander, representing a return to traditional values in architecture, talks about the ideal of harmony and Eisenman extols disharmony. Eisenman lauds Postmodern architecture that creates designs that are disharmonious because this better represents man’s relationship with the world around him and shocks him into considering this reality. 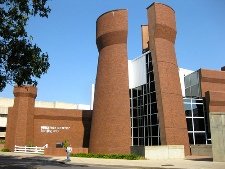 The Wexner Center for the Arts in Columbus, Ohio. Designed by Peter Eisenman
The debate put to words what Eisenman’s buildings put into practice. His Wexner Center for the Arts, in Columbus, Ohio is an excellent example of Postmodern architecture. If you think of a traditional building as being built to a grid, the Wexner Center is built to multiple, shifted grids. Walls are not parallel and perpendicular. This is disorienting, but from a practical matter it is also confusing. Getting from one place to another in the building is difficult and counter-intuitive. To borrow a term from computers, it has a confusing interface.

Frank Gehry: Modern Art on the Canvas of Life

At the time of this writing, the star in the firmament of Postmodern architecture is Frank Gehry. He is highly sought after as his buildings become tourist attractions. In many ways they are fun and playful, and often don’t look much like buildings. He eschews the straight and rectilinear. His buildings curve, they lean, they sometimes look like they are about to fall down. Thanks to modern computer software they don’t. However there is a price to pay on the inside. Walls that lean, and floors that aren’t level create feelings of nausea in some people. 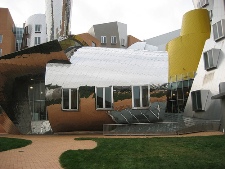 The Stata Center on MIT's campus is a wonderful interpretation of Dr. Seuss,
but is also disorienting. It is visually stimulating, but would you want to work there?

In his Stata Center at MIT the windows seem strangely proportioned, but it is difficult to say what is wrong with the windows, because they are leaning and meeting at unusual angles. In his InterActiveCorp headquarters building (see below) the walls seem to blur. The walls are bending and blurring and seem to be transforming. It is stunning, but it is difficult to imagine a city built on these concepts. An occasional building as an iconic conversation piece is one thing, but replicating the same ideas with block-after-block of Gehry inspired buildings is unsettling to consider. 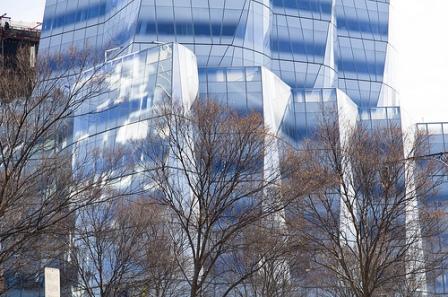 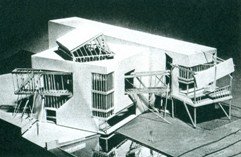 The folks at Triangle Modernists Houses have a full page on Gehry's houses. This house was never built but this model was picked for a Museum of Modern Art exhibit as an example of the perfect deconstructivist house. Visit their site. I admit to liking three of his houses (guess which ones). Check out the one that looks like an abandoned warehouse, or the multiple houses he shrouds in chain link fencing.
I prefer the eccentricity of Postmodern architecture to the predictability encountered in the Modernist International style of boxy buildings, but there is a better way. Remember that debate I quoted from, between Peter Eisenman and Christopher Alexander?

Alexander is himself an architectural theorist and he espouses something called a Pattern Language. His ideas prove pretty useful when we consider the alternative to Postmodern architecture as a reaction to Modernism. We will look at this Pattern Language more closely when we take up the New Urbanists and a return to tradition.

Return to Top of this Page - Postmodern Architecture

Forward to a Pattern Language

What do you think about Architectural Philosophy?

What is your take on Classicism, Modernism, or any other major architectural movement? Add to our conversation. Tell us what moves you or what turns you off.

Gaddis Architect Not rated yet
You might want to give a nod to Michael Graves who is often blamed, with good reason, for the Post Modern "Popitecture" (my phrase which may or may not …