A casement window is one that swings outward. Most houses use double-hung windows, the kind that slide up and down.

So what are the pros and cons of the casement window? When should you consider using a such a window? 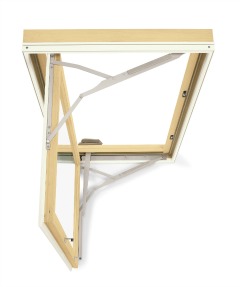 With a double hung window there is no such thing as fully opening the window. With a casement the entire window swings out.

With the double hung window the two halves can overlap and you can have half the window space open, but it will never be completely open. The casement window clears out the way so that there is more open area. Is this important to you? In most cases it is not, but where it is the casement is the way to go.

If you want to have a window screen with a casement you have to reverse the normal order. Since the window swings out the screen has to be on the inside. There is probably no pro or con to this. It is just the way it is.

The casement is controlled by a handle on the inside on the window sill. Opening the window requires cranking the handle.  It is not too much work, but some people might object to this.  I find it more difficult to open than a double hung, but sometimes completely closing double hung windows is difficult as the two halves often each have a little lip that have to mesh.  I have never had this  problem with a casement window.

A casement style window will not usually open all the way. They open up to about a 90 degrees. The mechanism for opening the window prevents them from going much further than this.

There are casement style windows where the crank is automated. These can be controlled with a remote control. This requires that a little motor be mounted on the window and this can look bulky. These are designed to look nice, but you still end up with something rather large and obtrusive at the base of your window. These are probably best suited for windows that are up high and hard to reach. In that case the motor unit is less visible and the advantage gained is that much greater.

Some casements avoid the use of a crank. These only require that you push out, or pull in, but that does not mean they lack a mechanism. They still have to prevent the wind from slamming the window open or closed.

Back in the day, in this case anytime before the mid-19th century, casements lacked any opening mechanism. In this case they usually had a latch, or some similar device, to keep the windows fully open. You can still find this type of window, since it does provide authenticity for an older house.

The only real drawback I see for this type of mechanism is that your window screens would get in the way, which means that you would have to remove them first. The window crank avoids this problem.  Of course, back in the day, they didn't have window screens, so this wasn't a problem.

Some skylights also use a casement mechanism. These usually only open a few inches, for ventilation. Otherwise a sudden rainstorm might create an embarrassing interior flood.

Since the frame around the glass has to support it from one side it has to be fairly strong and stiff. Casements work best with metal frames, but these tend to allow a lot of heat to escape. In order to have enough strength vinyl casement windows usually have a rather wide frame. This might be wide enough to seem unattractive. Often the frame is a hybrid, vinyl reinforced with metal.

Wood can also be used, but if the window is ever left open in a rainstorm the wood is directly exposed and might warp.

My mother-in-law has a large picture window, but at the base is a small casement window that pivots out from the top edge. This gives her the option of ventilating the room with the casement window while having a plate glass window that covers most of her wall.

I have seen similar windows where the casement is at the top.  That is the way they are shown on the Marvin Window site, where they are called "Venting Picture Windows". If they are up very high then the vent window will need to be automated or activated from below with a special crank and a long extension pole.

I have a casement window in a bathroom.  Overtime the grooves on the handle wore and it quit working.  I was able to replace the entire casement mechanism on my own.  However I no longer knew the brand of the window so I could not find an exact match for the mechanism.  There are a variety of mechanisms, but there are standard patterns and sizes, so I was able to find one on the internet.

I did have to drill a couple of new holes for the screws, but otherwise the new mechanism was identical to the old mechanism.

Based on this statistical sampling of 100% of my casement style windows and a careful review of the MTBF (meantime between failures), it appears that casement style windows may require more maintenance than double hung windows. This is said tongue-in-cheek.  My review of problems with casement windows did not reveal any serious concerns with maintenance.  The basic design for the hardware has been around for decades and is reliable.

Casement windows are a good choice for many houses and you should consider them when it comes time to replace your windows. I will not claim that you will be happier if you use them, but it is good to examine all of your options when making a decision that involves considerable expense.

To Top of Page - Casement Window

To Types of Windows

To Window Materials and Window Replacements