Human Scale and The Architect

Scale is size in relation to ourselves and the world around us. Human scale is that scale that feels comfortable to man. We naturally measure things against ourselves. That is why we have measure things by the foot. It was a natural scale that we always carried with us, but there are other scales to consider.


In architecture we deal primarily in 4 scales:

The man-sized scale is what we are used to. Our houses are typically built to this natural scale. A man feels comfortable walking through our doorways. The ceiling neither bumps his head, nor is lost in the shadows.

Monumental scale is impressive. Our public buildings are monumental. This is a statement of hierarchy. Those institutions represented by those buildings are bigger than us and we should stand in awe of them. 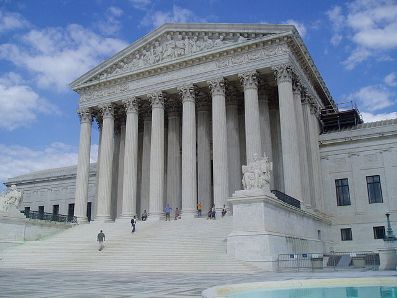 The steps and portico of the Supreme Court building dwarf the people and the rest of the building. The porch is beautiful. It awes those looking at it, but the roof is so high it doesn't even keep the rain out properly.
Shock scale can be either smaller or larger, but it is so out of the ordinary that it jolts us. You sometimes see it in art, and in architecture that strives to shock, but it is a rare thing in residential architecture. And that is the way it should be. 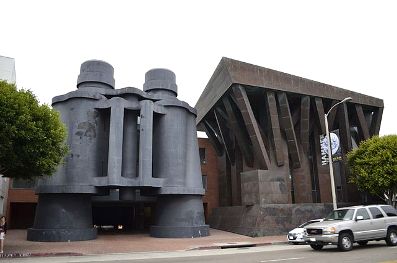 You enter this building through the space between the two sides of these over-sized binoculars. The binoculars are to shock scale because they are far bigger than could ever be used. Like the leaning columns on the right their purpose is to shock you out of your sense of the normal.
Intimate sizes are smaller than what is normal. Not Lilliputian. These don’t shock you, but they are smaller than what we expect. Not everybody would recognize intimate as a separate category. It is more of a sub-category of human-scale. 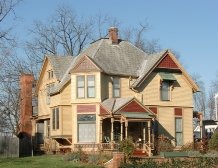 The porch on this house is built to human-scale. People on the porch are neither dwarfed nor crowded. It is both comfortable and practical.
A house should be human scale, or perhaps intimate scale. The exception would be palaces, where homes also represent the power and wealth of the state. However, even in palaces it is often the case where the actual living quarters are scaled down to human size. Kings and princes are human, and have the same basic needs as the rest of us.

Houses sometimes have oversized porches. Consider the Greek Revival houses with front porticos that belong on a temple. These are monumental sized, but the rest of the house is not. The structure may be two stories, but you enter in to only the bottom floor. It is not monumental sized in its interior. This is one of the arguments against that style. The monumental nature of the façade detracts from the homey comfort of the house.

Contemporary houses sometimes have walls that are several stories high covered in glass. A monumental room with a monumental glass wall can overwhelm the people in it. The view may be worth it, but it is probably best if there are intimate spaces within that room, and other rooms on a human scale that people can escape to.

I am not saying that monumental is always bad, just that we are less comfortable in such a place than we would be if it was human scaled. Nor am I arguing against atrium ceilings. Most houses have atriums that are not much larger than a normal room. It is when you get the point where the elements of the house are no longer to human scale that we have problems.

Intimate scale is sometimes used in our houses, usually in the form of nooks and alcoves. A recessed seat in a bay window, and an inglenook by a fireplace are examples of places that could be built to intimate scale. Here the closeness of the walls provides protection and privacy. 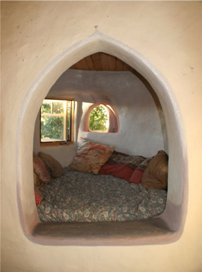 A bedwomb, or bed alcove, from Naturalhomes.org Facebook album illustrating Christopher Alexander's Pattern Language. This is pattern number 188, "Bed Alcove".
Thomas Jefferson, in his house in Monticello, had a bed chamber tucked into the walls between two rooms. With the curtains down you could consider it an intimate scaled room. Architect Nader Khalili, inventor of the superadobe method of building, advocated the use bed wombs for sleeping. Like Jefferson’s bedchamber these are rooms no bigger than the bed embedded into the adobe walls. The intimate scale provides a womb-like enclosure that helps you sleep. It is not for claustrophobics, but some people find these rooms cozy and comfortable.

There is a small movement that favors tiny houses. These are entire houses that take up no more space than an average living room. Smaller than what a “cottage” might imply, these houses often have features that are intimate in scale. Obviously humans are living in these things, so you could call it human-scale, but it is smaller than what the average modern person would be comfortable with.

From the standpoint of residential architecture, the specialty of this website, I advocate for the use of human scale as the rule with a few intimate exceptions embedded into the design of the house. I will grudgingly accept the monumental in the public rooms, so long as there are retreats and private spaces that mitigate the intimidating aspects of that scale.

So then, where does one draw the line? At what point does a room move out of the human scale and into the monumental? Are 12 foot ceilings bad? Are 30 foot? I think you have to consider the whole. A grand ballroom is appropriate if you have grand balls, but to use it as your living room creates a situation where the room takes on the character of a hotel lobby. Now hotel lobbies can be very nice, but they are exposed and public, whereas a home should be private and protective.

To Top of this Page - Human Scale

Did you like this page? Then check out my Architectural Concepts page.

Or, move on to the next topic - Proportions